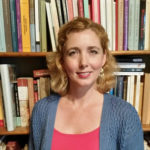 My name is Yasmine Beale-Rivaya. I am a Full Professor of Spanish Linguistics at Texas State University, San Marcos. I hold the NEH Distinguished Professor in the Humanities (2021-2024) for development of a project related to minority languages.

I received my PhD in 2006 from UCLA in Hispanic Linguistics.

My research centers on language contact, change, and borrowing in borderland communities. I focus is evidence and practices of language contact and the contexts of the language practices between Romance and Semitic languages (mostly Andalusí-Arabic) among medieval Iberian communities. Specifically, I analyze the linguistic practices of ´hybrid´ communities such as the Mozarabs (Arabized-Christians), Mudejars (Christianized-Muslims), and Moriscos (Muslim Converts) living along borderland areas in Medieval Iberia. I compare the linguistic experiences of these multilingual communities in the Mediterranean to those of Spanish-speaking or people of Spanish linguistic heritage along borderland communities between the US and Mexico. My interest in the linguistic challenges and opportunities these communities in the early Middle Ages and in the Early Modern period has led me to think about how patterns of minorization and linguistic segregation are repeated in contemporary contexts and my current digital humanities project titled Minority and Minoritized Languages and Cultures.

The purpose of this site is to inform in a more dynamic way than through my C.V. about my current research, my teaching, mentoring, and activities related to service to the profession.

This site is part of Humanities Commons. Explore other sites on this network or register to build your own.
Terms of ServicePrivacy PolicyGuidelines for Participation